The journey to Reinforcement learning continues… It’s time to analyze the infamous Q-learning and see how it became the new standard in the field of AI (with a little help from neural networks).

First things first. In the last post , we saw the basic concept behind Reinforcement Learning and we frame the problem using an agent, an environment, a state (S), an action(A) and a reward (R). We talked about how the whole process can be described as a Markov Decision Process and we introduced the terms Policy and Value. Lastly, we had a quick high-level overview of the basic methods out there.

When we have the action value function, the Q value, we can simply choose to perform the action with the highest value from a state. But how do we find the Q value?.

What is Q learning?

So, we will learn the Q value from trial and error? Exactly. We initialize the Q, we choose an action and perform it, we evaluate it by measuring the reward and we update the Q accordingly. In first, randomness will be a key player but as the agent explores the environment, the algorithm will find the best Q value for each state and action. Can we describe this mathematically?

Thank you Richard E. Bellmann. The above equation is known as the Bellman equation and plays a huge part in RL today’s research. But what does it state?

The Q value, aka the maximum future reward for a state and action, is the immediate reward plus the maximum future reward for the next state. And if you think about it, it makes perfect sense. Gamma (γ) is a number between [0,1] and its used to discount the reward as the time passes, given the assumption that action in the beginning, are more important than at the end (an assumption that is confirmed by many real-life use cases). As a result, we can update the Q value iteratively.

The basic concept to understand here is that the Bellman equation relates states with each other and thus, it relates Action value functions. That helps us iterate over the environment and compute the optimal Values, which in turn give us the optimal Policy.

In its simplest form, Q values is a matrix with states as rows and actions as columns. We initialize the Q-matrix randomly, the agent starts to interact with the environment and measures the reward for each action. It then computes the observed Q values and updates the matrix.

The algorithm, as described above, is a greedy algorithm, as it always chooses the action with the best value. But what if some action has a very small probability to produce a very large reward? The agent will never get there. This is fixed by adding random exploration. Every once in a while, the agent will perform a random move, without considering the optimal policy. But because we want the algorithm to converge at some point, we lower the probability to take a random action as the game proceeds.

Q learning is good. No one can deny that. But the fact that it is ineffective in big state spaces remains. Imagine a game with 1000 states and 1000 actions per state. We would need a table of 1 million cells. And that is a very small state space comparing to chess or Go. Also, Q learning can’t be used in unknown states because it can’t infer the Q value of new states from the previous ones.

In deep Q learning, we utilize a neural network to approximate the Q value function. The network receives the state as an input (whether is the frame of the current state or a single value) and outputs the Q values for all possible actions. The biggest output is our next action. We can see that we are not constrained to Fully Connected Neural Networks, but we can use Convolutional, Recurrent and whatever else type of model suits our needs. 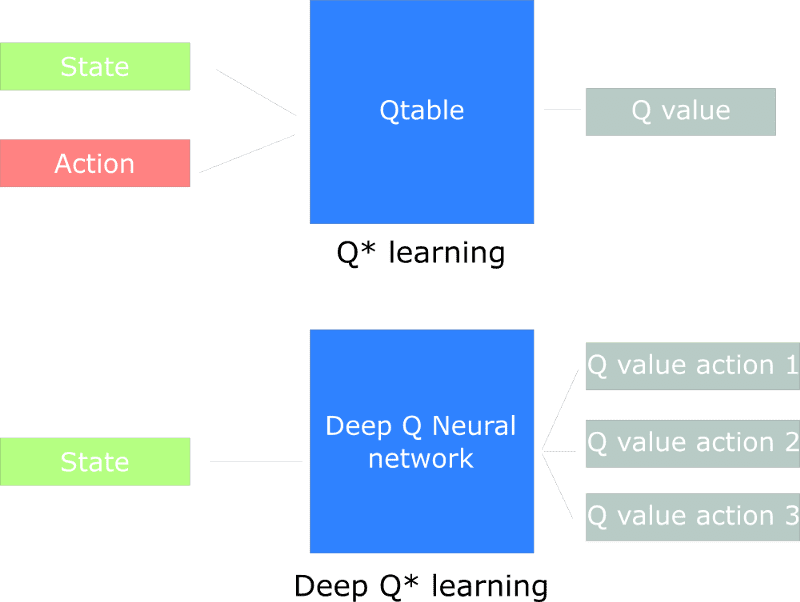 I think it’s time to use all that stuff in practice and teach the agent play Mountain Car. The goal is to make a car drive up a hill. The car's engine is not strong enough to climb the hill in a single pass. Therefore, the only way to succeed is to drive back and forth to build up momentum. 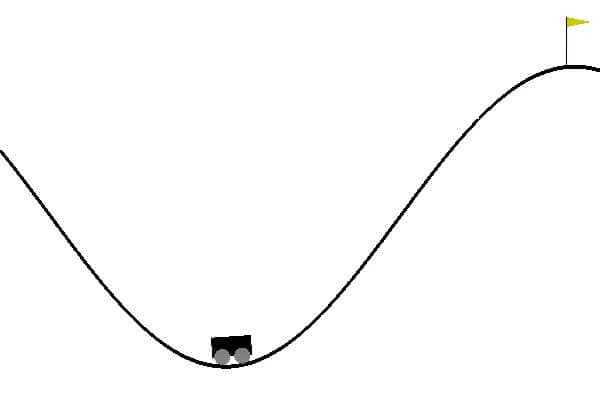 I will explain more about Deep Q Networks alongside with the code. First we should build our Agent as a Neural Network with 3 Dense layers and we are goint to train it using Adam optimization.

Before we train our DQN, we need to address an issue that plays a vital role on how the agent learns to estimate Q Values and this is:

We combined all of Reinforcement Learning articles into a single pdf. So if you don't have time to read the whole article or you want a pdf version to read offline, click the button below

* We're committed to your privacy. AI Summer uses the information you provide to send you our newsletter and contact you about our products. You may unsubscribe from these communications at any time. For more information, check out our Privacy Policy.

Experience replay is a concept where we help the agent to remember and not forget its previous actions by replaying them. Every once in a while, we sample a batch of previous experiences (which are stored in a buffer) and we feed the network. That way the agent relives its past and improve its memory. Another reason for this task is to force the agent to release himself from oscillation, which occurs due to high correlation between some states and resulting in the same actions over and over.

As you can see is the exact same process with the Q-table example, with the difference that the next action comes by the DQN prediction and not by the Q-table. As a result, it can be applied to unknown states. That's the magic of Neural Networks.

You just created an agent that learns to drive the car up the hill. Awesome. And what is more awesome is that the exact same code(i mean copy paste) can be used in many more games, from Atari and Super Mario to Doom(!!!)

Just on more time, I promise.

If you need extra material, I can't recommend enough the Advanced AI: Deep Reinforcement Learning Course in Python on Udemy. It covers everything you will need on Deep Q Learning and much much more.

In the next episode, we will remain on the Deep Q Learning area and discuss some more advanced techniques such as Double DQN Networks, Dueling DQN and Priotitized Experience replay.