Neural radiance fields (NeRFs) slowly become the next hot topic in the world of Deep Learning. Since they were originally proposed in 2020, there is an explosion of papers as it can be seen from CVPR’s 2022 submissions. Time magazine recently included a variation of NeRFs, called instant graphics neural primitives, in their best inventions of 2022 list. But what exactly are NeRFs they and what are their applications?

In this article, I will try to demystify all the different terminologies such as neural fields, NeRFs, neural graphic primitives etc. To give you a preview, they all stand for the same thing depending on who you ask. I will also present an explanation of how they work by analyzing the two most influential papers.

What is a neural field?

The term neural field was popularized by Xie et al. 1 and describes a neural network that parametrizes a signal. This signal usually is a single 3D scene or object but that’s not mandatory. We can also use neural fields to represent any type of signals (discrete or continuous) such as audio or images.

Their most popular use is in computer graphics applications such as image synthesis and 3D reconstruction, which is the main topic of this article.

Please note that neural fields have also been applied in other applications such as generative modeling, 2D Image Processing, robotics, medical imaging and audio parameterization.

In most neural field variations, fully connected neural networks encode objects or scenes' properties. Importantly, one network needs to be trained to encode (capture) a single scene. Note that in contrast with standard machine learning, the goal is to overfit the neural network to a particular scene. In essence, neural fields embed the scene into the weights of the network.

Why use neural fields?

3D scenes are typically stored using voxel grids or polygon meshes. On the one hand, voxels are usually very expensive to store. On the other hand, polygon meshes can represent only hard surfaces and aren’t suitable for applications such as medical imaging. 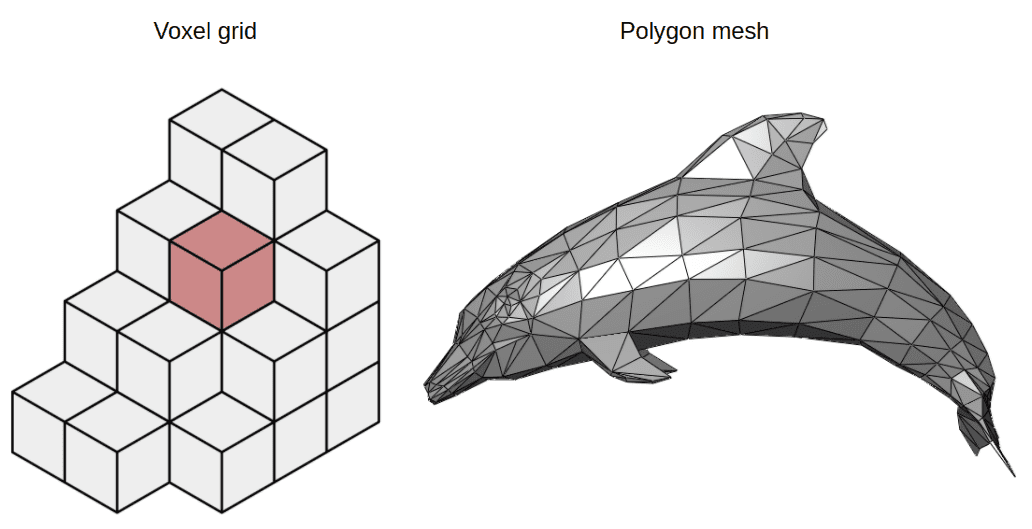 Neural fields have gained increasing popularity in computer graphics applications as they are very efficient and compact 3D representations of objects or scenes. Why? In contrast with voxels or meshes, they are differentiable and continuous. One other advantage is that they can also have arbitrary dimensions and resolutions. Plus they are domain agnostic and do not depend on the input for each task.

At that point, you may ask: where does the name neural fields come from?

What do fields stand for?

In physics, a field is a quantity defined for all spatial and/or temporal coordinates. It can be represented as a mapping from a coordinate x to a quantity y, typically a scalar, a vector, or a tensor. Examples include gravitational fields and electromagnetic fields.

Next question you may ask: what are the steps to “learn” a neural field?

Steps to train a neural field

Following Xie et al. 1, the typical progress of computing neural fields can be formulated as follows:

For clarity, let’s use some mathematical terms to denote the process. The reconstruction is a neural field, denoted as Φ:X→Y, that maps the world coordinates xrecon​∈X to field quantities yrecon​∈Y. A sensor observation is also a neural field Ω:S→T that transforms the sensor coordinates xsens​∈S into measurements tsens​∈T. The forward map is a mapping between the two neural fields F:(X→Y)→(S→T) and is differentiable.

As a result, we can solve the following optimization problem to calculate the neural field Φ.

The table below (Xie et al.) illustrates different applications of neural fields alongside the reconstruction and sensor domains.

Let’s analyze the most popular architecture of neural fields called NeRFs that solves the problem of view synthesis.

The most prominent neural field architecture is called Neural Radiance Fields or NeRFs. They were originally proposed in order to solve view synthesis. View synthesis is the task where you generate a 3D object or scene given a set of pictures from different angles (or views). View synthesis is almost equivalent to 3D reconstruction. 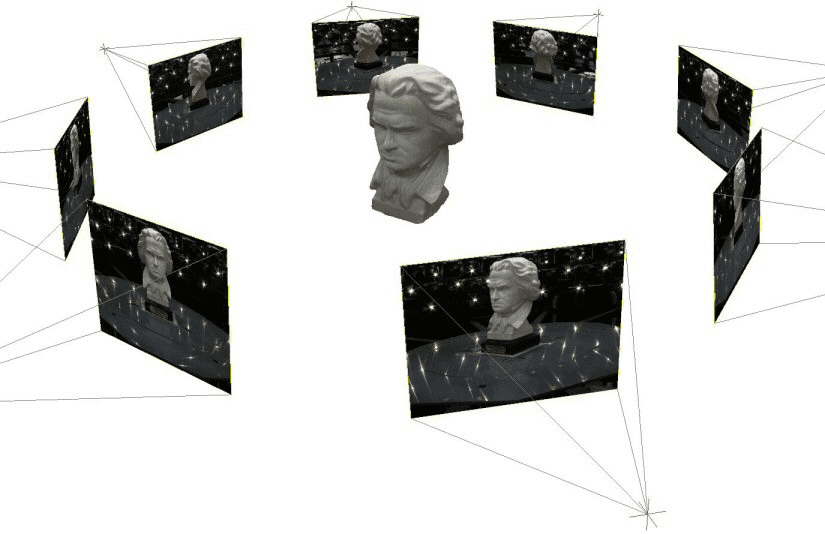 Note that in order to fully understand NeRFs, one has to familiarize themselves with many computer graphics concepts such as volumetric rendering and ray casting. In this section, I will try to explain them as efficiently as possible but also leave a few extra resources to extend your research. If you seek for a structured course to get started with computer graphics, Computer Graphics by UC San Diego is the best one afaik

NeRFs and Neural fields terminology side by side

As I already mentioned, NeRFs are a special case of neural fields. For that reason, let’s see a side-by-side comparison. Feel free to revisit this table once we explain NeRFs in order to draw the connection between them and neural fields.

NeRFs as proposed by Mildenhall et al 2. accept a single continuous 5D coordinate as input, which consists of a spatial location (x,y,x) and viewing direction (θ,ϕ). This particular point of the object/scene is fed into an MLP, which outputs the corresponding color intensities c=(r,g,b) and its volume density σ.

The (probability) volume density indicates how much radiance (or luminance) is accumulated by a ray passing through (x,y,z) and is a measure of the “effect” this point has on the overall scene. Intuitively, the probability volume density provides the likelihood that the predicted color value should be taken into account.

The power of the neural field is that it can output different representations for the same point when viewed from different angles. As a result, it can capture various lighting effects such as reflections, and transparencies, making it ideal to render different views of the same scene. This makes it a much better representation compared to voxels grid or meshes.

The problem with training these architectures is that the target density and color are not known. Therefore we need a (differentiable) method to map them back to 2D images. These images are then compared with the ground truth images formulating a rendering loss against which we can optimize the network.

As shown in the image above, volume rendering is used to map the neural field output back to 2D the image. The standard L2 loss can be computed using the input image/pixel in an autoencoder fashion. Note that volume rendering is a very common process in computer graphics. Let’s see in short how it works.

When sampling coordinates from the original images, we emit rays at each pixel and sample at different timesteps, a process known as ray marching. Each sample point has a spatial location, a color, and a volume density. These are the inputs of the neural field.

A ray is a function of its origin o, its direction d, and its samples at timesteps t. It can be formulated as r(t)=o+td. Both the volume density and the color are dependent on the ray and can be denoted as σ(r(t)) and c(r(t)) respectively.

To map them back to the image, all we have to do is integrate these rays and acquire the color of each pixel.

given that tn​ and tf​ are the bound of the ray and T(t) its transmittance. The transmittance is a measure of how much the ray can penetrate the 3D space to a certain point and is defined as

The aforementioned technique, wherein you generate images or video by tracing a ray and integrating along it is also referred as neural rendering or differentiable rendering in bibliography.

For more details on volume rendering, check out this great lecture from Cem Yuksel and University of Utah.

For a more complete explanation of NeRFs, here is a great video by Yannic Klitcher:

A few more notes on NeRFs

The number of variations and enhancements over NeRFs is growing rapidly over the past few years. These typically fall into 4 different categories:

Note that it is almost impossible to curate a good survey of all NeRF papers. Dellaert et al 3 and Xie et al 1 are the only good sources I could find. The authors from the latter have created an excellent database of related papers as well as a very useful Twitter account.

One of the most important papers following NeRFs is Instant Neural Graphics Primitives as proposed by Muller et al 4. Notably, the authors by Nvidia manage to speed up the training from hours to a couple of seconds, using a novel input representation.

The authors utilize typical neural fields, also referred to as neural graphic primitives, combined with a novel representation of the input called multiresolution hash encoding. This type of encoding permits the use of small neural networks reducing the total floating points operation needed.

As far as I know, neural graphics primitives is just a different terminology for neural fields.

Moreover, the authors suggest the use of specific GPU implementations for each task, reducing, even more, the overall computational complexity. One such proposal is to implement the entire MLP as a single CUDA kernel so that every calculation is performed in the GPU’s local cache.

Let’s now talk about multiresolution hash encoding, which is arguably the most important contribution of the paper. We will consider a 2D example for simplicity purposes but the following steps generalize in 3 dimensions.

Starting with a specific location X on a 2D image,

The whole procedure is fully differentiable. To train the encodings, the loss gradients are propagated through the MLP, concatenation, and linear interpolation, and then accumulated in the looked-up feature vectors. Also, it’s important to note that this procedure is entirely task-agnostic and can be used for different architectures and tasks besides NeRFs.

But what do we gain from this somewhat complicated encoding?

The following video provides an excellent deep dive into the paper for those interested.

In my opinion , NeRFs is one of the most exciting applications of neural networks of the last few years. Being able to render 3D models in a matter of seconds was simply inconceivable a couple of years ago. It won’t be long before we see these architectures enter the gaming and simulation industries.

To experiment with NeRFs, I recommend visiting the instant-ngp repo by Nvidia, install the necessary dependencies and play around by creating your own models.

If you’d like to see more articles of computer graphics, please let us know on our discord server. Finally, if you like our blogposts, feel free to support us by buying our courses or books.