Today’s topic is a very exciting aspect of AI called generative artificial intelligence. In a few words, generative AI refers to algorithms that make it possible for machines to use things like text, audio files and images to create/generate content. In a previous post, I talked about Variational Autoencoders and how they used to generate new images. I mentioned that they are a part of a bigger set of models called generative models and I will talk more about them in a next article. So here we are.

As I briefly explained in that post, there are two types to modes. Discriminative and generative. The first are the most common models, such as convolutional or recurrent neural networks, which used to distinguish/discriminate patterns in data in order to categorize them in classes. Applications such as image recognition, skin-cancer diagnosis, Ethereum prediction are all fall in the category of discriminative modes.

The latter are able to generate new patterns in data. As a result, they can produce new images, new text, new music. To put it in a strict mathematical form, discriminative models try to estimate the posterior probability p(y|x), which is the probability of an output sample (e.g the handwritten digit) given an input sample (an image of a handwritten digit). On the other hand, generative models estimate the joint probability p(x,y) , which is the probability of both input sample and sample output to be true at the same time. In reality, it tries to calculate the distribution of a set of classes not the boundary between them.

Can you imagine the possibilities? Well you can take a glimpse of them by looking at the current progress in the field and some existing applications. Generative models have been used so far to produce text from images, to develop molecules in oncology, to discover new drugs and to transfer the style of artists like Van Gogh to new images. And I pretty sure you heard about Deepfakes, where they put celebrities faces on any sort of video. And if you think you can tell the fakes apart from the real ones, forget it. You can’t.

If you clicked on some of the above links, you may have noticed something that is even more fascinating. All the applications have become possible due to something called GANs. GANs or Gererative Adversarial Networks are the base architecture behind most of generative applications. Of course, there are many other cool models, such as Variational Autoencoders, Deep Boltzman machines, Markov chains but GANs are the reason why there is so much hype in the last three years around generative AI.

What are Generative Adversarial Networks?

Generative Adversarial Networks were introduced in 2016 by Ian Goodfellow in one of the most promising AI paper of the last decade. They are an unsupervised learning technique and they based on a simple premise:

You want to generate new data. What do you do? You build two models. You train the first one to generate fake data and the second one to distinguish real from fakes ones. And you put them compete against each other.

Boom! There you have it. I wish it would be as simple as that. It isn’t. But this is the main principle behind GANs.

Ok let’s get into some details. The first model is a neural network, called the Generator. Generator’s job is to produce fake data with nothing but noise as input. The second model, the Discriminator, receives as input both the real images and the fake ones (produced by the generator) and learns to identify if the image is fake or not. As you put them contesting against each other and train them simultaneously the magic begins: 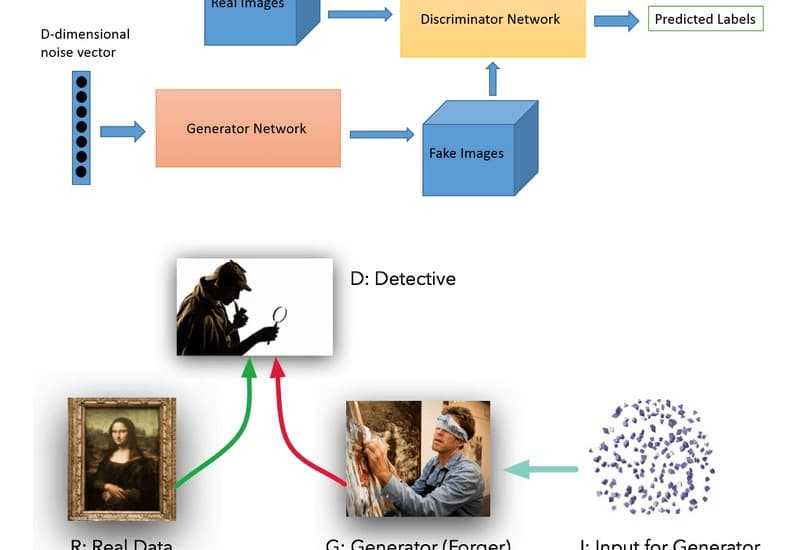 The above image is a great analogy that describes the functionality between GAN. The Generator can be seen as a forger who creates fraudulent documents and the Discriminator as a Detective who tries to detect them. They participate in a zero-sum game and they both become better and better as the time passes.

So far so good. We have the models and now we have to train them. Here is where the problems begin to arise because it is not the standard method where we train a neural network with gradient descent and a loss function. Here we have two models competing against each other. So, what we do?

Well we are not sure. Optimization of GAN’s is one of the most active research areas at the moment with many new papers appear constantly. I will try to explain the base here and I am going to need some math and some game theory (!!!) to do that. Please don’t leave. Stay with me and in the end, it is all gonna make sense.

How to train them?

We can consider that we have a minimax game here. To quote Wikipedia: “The maximin value of a player is the highest value that the player can be sure to get without knowing the actions of the other players; equivalently, it is the lowest value the other players can force the player to receive when they know the player's action”

We represent the loss as a minimax function:

What do we have here?

The training is stopped when the discriminator can’t maximize the function and the generator can’t minimize it. In game theory terms, they reach Nash equilibrium.

I hope you’re still here. This is the main idea and is called adversarial training. Of course, there are several pitfalls which occur frequently such as:

Over the past few years, there is a big contribution from scientists to solve these problems and we can say that a lot of progress has been made. Just do a quick search on arxiv-sanity. It’s still very early, though. Remember. GAN’s exists for less than three years.

If you are interested in learn more about GAN, I totally recommend the 4th week of the Introduction to Deep Learning course by the HSE University

I will close with some key facts. If you skipped the whole article it’s ok. But don’t skip those: