Regularization is a set of strategies used in Machine Learning to reduce the generalization error. Most models, after training, perform very well on a specific subset of the overall population but fail to generalize well. This is also known as overfitting. Regularization strategies aim to reduce overfitting and keep, at the same time, the training error as low as possible.

In this article, we will present a review of the most popular regularization techniques used when training Deep Neural Networks. We will categorize these techniques on bigger families based on their similarities.

If the test set consists of 100K images, this means that 3K more images were classified correctly! 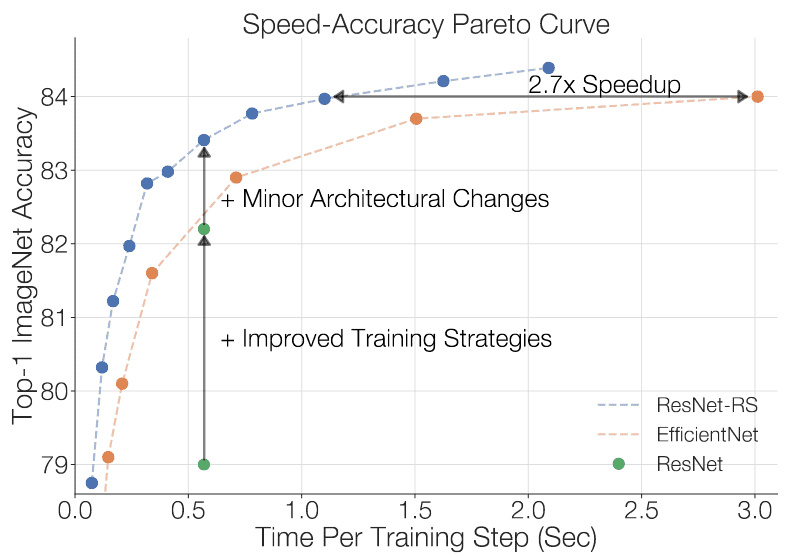 Now, let’s cut to the chase.

According to Ian Goodfellow, Yoshua Bengio and Aaron Courville in their Deep Learning Book:

“In the context of deep learning, most regularization strategies are based on regularizing estimators. Regularization of an estimator works by trading increased bias for reduced variance. An eﬀective regularizer is one that makes a proﬁtabletrade, reducing variance signiﬁcantly while not overly increasing the bias.”

In simple terms, regularization results in simpler models. And as the Occam’s razor principle argues: the simplest models are the most likely to perform better. Actually, we constrain the model to a smaller set of possible solutions by introducing different techniques.

To get a better insight you need to understand the famous bias-variance tradeoff.

The bias-variance tradeoff: overfitting and underfitting

First, let’s clarify that bias-variance tradeoff and overfitting-underfitting are equivalent.

The bias error is an error from wrong assumptions in the learning algorithm. High bias can cause an algorithm to miss the relevant relations between features and target outputs. This is called underfitting.

The bias-variance tradeoff is a term to describe the fact that we can reduce the variance by increasing the bias. Good regularization techniques strive to simultaneously minimize the two sources of error. Hence, achieving better generalization.

As a side material, I highly recommend the DeepLearning.Ai course: Improving Deep Neural Networks: Hyperparameter Tuning, Regularization and Optimization

How to introduce regularization in deep learning models

The most common family of approaches used before the Deep Learning era in estimators such as linear and logistic regression, are parameters norm penalties. Here we add a parameter norm penalty Ω(θ) to the loss function J(θ;X,y):

where θ denotes the trainable parameters, X the input, and y and target labels. a is a hyperparameter that weights the contribution of the norm penalty, hence the effect of the regularization.

Ok, the math looks good. But why exactly does this work? Let’s look at the two most popular methods to make that crystal clear. L2 and L1.

L2 regularization, also known as weight decay or ridge regression, adds a norm penalty in the form of Ω(θ)=21​∣∣w∣∣22​ . The loss function has been transformed to:

If we compute the gradients we have:

For a single training step and a learning rate λ, this can be written as:

The equation effectively shows us that each weight of the weight vector will be reduced by a constant factor on each training step.

Note here that we replaced θ with w. This was due to the fact that usually we regularize only the actual weights of the network and not the biases b.

If we look at it from the viewpoint of the entire training here is what happens:

L1 regularization chooses a norm penalty of Ω(θ)=∣∣w∣∣1​=∑i​∣wi​∣. In this case, the gradient of the loss function becomes:

As we can see, the regularization term does not scale linearly, contrary to L2 regularization, but it’s a constant factor with an alternating sign. How does this affect the overall training?

The L1 regularizer introduces sparsity in the weights by forcing more weights to be zero instead of reducing the average magnitude of all weights ( as the L2 regularizer does). In other words, L1 suggests that some features should be discarded whatsoever from the training process.

Elastic net is a method that linearly combines L1 and L2 regularization with the goal to acquire the best of both worlds . More specifically the penalty term is as follows:

Elastic Net regularization reduces the effect of certain features, as L1 does, but at the same time, it does not eliminate them. So it combines feature elimination from L1 and feature coefficient reduction from the L2.

Entropy regularization is another norm penalty method that applies to probabilistic models. It has also been used in different Reinforcement Learning techniques such as A3C and policy optimization techniques. Similarly to the previous methods, we add a penalty term to the loss function.

If we assume that the model outputs a probability distribution p(x), then the penalty term will be denoted as:

The term “Entropy” has been taken from information theory and represents the average level of "information" inherent in the variable's possible outcomes. An equivalent definition of entropy is the expected value of the information of a variable.

In the context of Reinforcement Learning, one can say that the entropy term added to the loss, promotes action diversity and allows better exploration of the environment. For more information on policy gradients and A3C, check our previous articles: Unravel Policy Gradients and REINFORCE and The idea behind Actor-Critics and how A2C and A3C improve them.

Noise injection is one of the most powerful regularization strategies. By adding randomness, we can reduce the variance of the models and lower the generalization error. The question is how and where do we inject noise?

Label smoothing is a way of adding noise at the output targets, aka labels. Let’s assume that we have a classification problem. In most of them, we use a form of cross-entropy loss such as −∑c=1M​yo,c​log(po,c​) and softmax to output the final probabilities.

To address that, label smoothing replaces the hard 0 and 1 targets by a small margin. Specifically, 0 are replaced with k−1ϵ​ and 1 with 1−ϵ, where k is the number of classes.

Another strategy to regularize deep neural networks is dropout. Dropout falls into noise injection techniques and can be seen as noise injection into the hidden units of the network.

In practice, during training, some number of layer outputs are randomly ignored (dropped out) with probability p.

During test time, all units are present, but they have been scaled down by p. This is happening because after dropout, the next layers will receive lower values. In the test phase though, we are keeping all units so the values will be a lot higher than expected. That’s why we need to scale them down.

By using dropout, the same layer will alter its connectivity and will search for alternative paths to convey the information in the next layer. As a result, each update to a layer during training is performed with a different “view” of the configured layer. Conceptually, it approximates training a large number of neural networks with different architectures in parallel.

"Dropping" values means temporarily removing them from the network for the current forward pass, along with all its incoming and outgoing connections. Dropout has the effect of making the training process noisy. The choice of the probability p depends on the architecture. 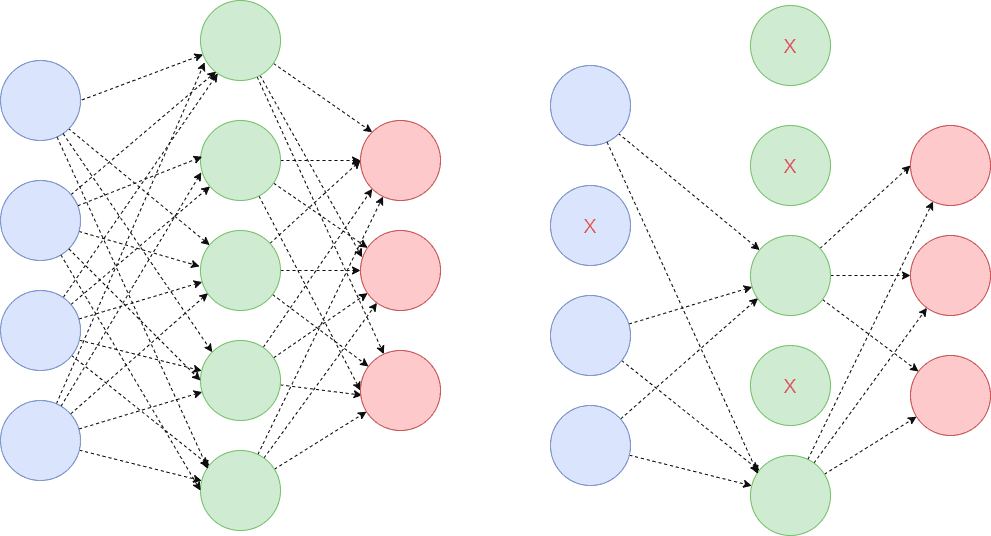 This conceptualization suggests that perhaps dropout breaks up situations where network layers co-adapt to correct mistakes from prior layers, making the model more robust. It increases the sparsity of the network and in general, encourages sparse representations! Sparsity can be added to any model with hidden units and is a powerful tool in our regularization arsenal.

There are many more variations of Dropout that have been proposed over the years. To keep this article relatively digestible, I won’t go into many details for each one. But I will briefly mention a few of them. Feel free to check out paperswithcode.com for more details on each one, alongside the original paper and code.

Stochastic depth goes a step further. It drops entire network blocks while keeping the model intact during testing. The most popular application is in large ResNets where we bypass certain blocks through their skip connections.

In particular, Stochastic depth (Huang et al., 2016) drops out each layer in the network that has residual connections around it. It does so with a specified probability p that is a function of the layer depth.

Mathematically we can express this as:

where b is a Bernoulli random variable that shows if a block is active or inactive. If b=0 the block will be inactive and if b=1 active.

Early stopping is one of the most commonly used strategies because it is very simple and quite effective. It refers to the process of stopping the training when the training error is no longer decreasing but the validation error is starting to rise. 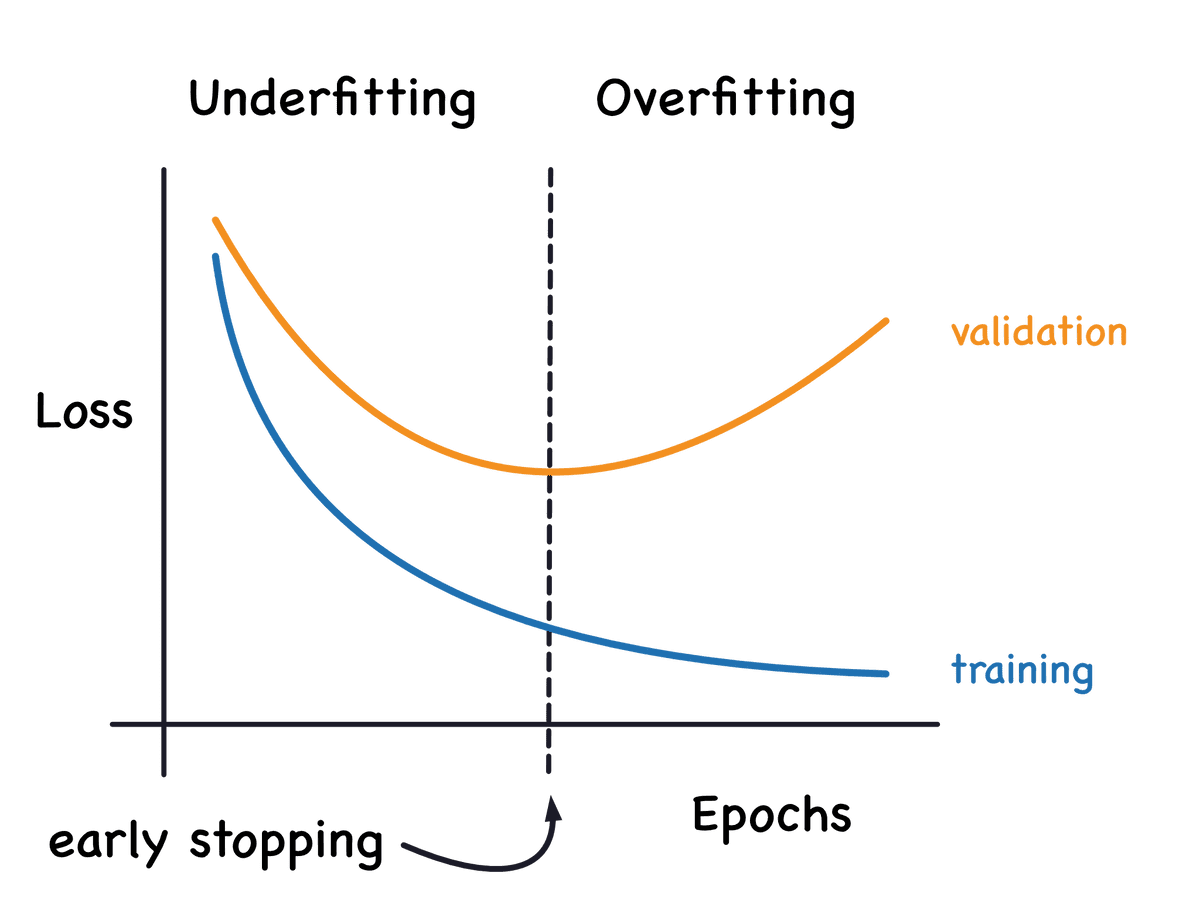 A different way to think of early stopping is as a very efficient hyperparameter selection algorithm, which sets the number of epochs to the absolute best. It essentially restricts the optimization procedure to a small volume of the trainable parameters space close to the initial parameters.

It can also be proven that in the case of a simple linear model with a quadratic error function and simple gradient descent, early stopping is equivalent to L2 regularization.

Parameter sharing follows a different approach. Instead of penalizing model parameters, it forces a group of parameters to be equal. This can be seen as a way to apply our previous domain knowledge to the training process. Various approaches have been proposed over the years but the most popular one is by far Convolutional Neural Networks.

Convolutional Neural Networks take advantage of the spatial structure of images by sharing parameters across different locations in the input. Since each kernel is convoluted with different blocks of the input image, the weight is shared among the blocks instead of having separate ones. 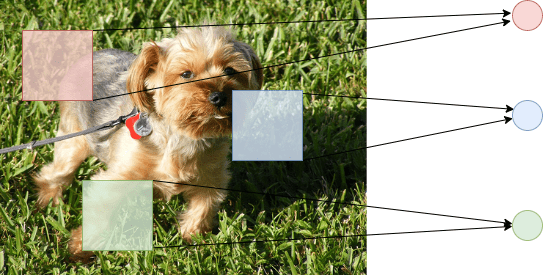 Visually this can be represented as: 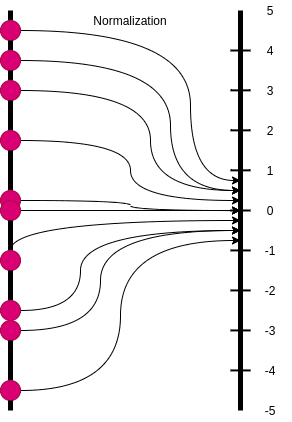 While mathematically we have:

Where γ and β are learnable parameters.

Batch normalization can implicitly regularize the model and in many cases, it is preferred over Dropout.

Here unfortunately there is not a clear answer. Just empirical observations.

Both of these “noises” will make the model more robust and reduce its variance. A great overview of why BN acts as a regularizer can be found in Luo et al, 2019.

Data augmentation is the final strategy that we need to mention. Although not strictly a regularization method, it sure has its place here.

Data augmentation refers to the process of generating new training examples to our dataset. More training data means lower model’s variance, a.k.a lower generalization error. Simple as that. It can also be seen as a form of noise injection in the training dataset.

Data augmentation can be achieved in many different ways. Let’s explore some of them.

And that concludes our journey in regularization. Feel free to reach out to us if you have any questions. As always, if you find it useful, feel free to share it.

See you again next Thursday.